A TASTE OF VIENNESE COFFEE CULTURE.

Viennese coffee house culture has been recognised by UNESCO as an item of intangible cultural heritage since 2011, and is unique the world over. What makes these coffee houses so very special? There’s a characteristic mood created by the marble tables, Thonet chairs, snugs, and the stands and tables strewn with newspapers. UNESCO says they are “…places in which time and space are consumed, but only coffee can be found on the bill.”

The first documented coffee houses sprang up toward the end of the 17th century. In time they became venues for conversations on literature, discussions about politics, and meeting places for major figures of every subsequent era. Regular guests included musicians and composers like Ludwig van Beethoven, literati, and artists such as Gustav Klimt and Egon Schiele; all of whom met there to converse, read newspapers, gather inspiration – and to work.

These traditions are what made the typical Vienna coffee house so special – and do so to this day; although they can also be found beyond the city of Vienna. These places offer much more, and are part of a way of life. Young urbane guests are also drawn to coffee houses, since they promise pleasure, leisure and relaxation. People meet there; not just for a quick coffee, but to spend time. They are places to be.

fabia – At home where, for a moment, the world stops spinning. 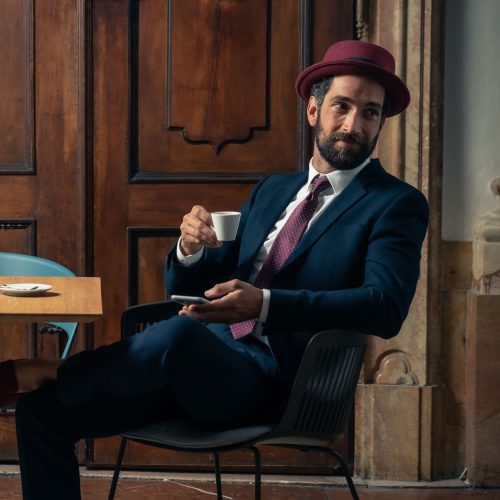 How do the Einspänner and Fiaker differ? How did the Franziskaner get its name? What is special about the Vienna Melange? The key to the charming history of Viennese coffee house traditions lies in the tales it is built upon – and there are lots of them! Many of the most important stories can be read by fabia connoisseurs on their sugar sachets.

Aficionados and interested laypeople will enjoy the following overview of the numerous Viennese specialty coffees. Of course, every single variety comes in the perfect fabia cup or fabia glass. The accompanying sugar and biscuits are just as important as the provision of a spoon which, for Viennese coffee specialities, is typically balanced atop the glass of water.

A large mocha consists of twice the amount of ground coffee (14g) and twice as much water as a small mocha. A large mocha is also referred to as a large black coffee: The "Großer Schwarzer".

The small brown or "black" coffee is a small mocha with coffee cream.

This large brown, actually "black" coffee, is a double-mocha with twice the amount of ground coffee (14g) and twice as much water as a small mocha, and is served with coffee cream.

This is a small mocha stretched into a large cup with hot water. The Verlängerter is the archetypal Vienna coffee speciality and is most traditionally served as a mocha accompanied by a jug of hot water. This enables a coffee lover to add water to the mocha according to taste.

The Viennese Melange is one of the best-known Viennese coffee house specialities – half coffee, half milk – served in a large cup. Originally, the French word for mixture, mélange, was used to define any one of eight coffee colours between dark brown and gold, and waiters would present guests with a colour-range card so that they could select their preferred mixture.

In Vienna, Einspänner can refer to a dish with a single sausage, a lone coachman pulled by a single horse – or a Viennese specialty coffee. A small mocha is served with a large blob of whipped cream, originally to keep the coffee warm. Since the coach driver needed one hand to control the horse, the hot Einspänner coffee was served in a glass with a handle.

A Fiaker is a large mocha with rum served in a large cup. Back then, Vienna’s coachmen didn’t earn much money, so they tended to add rum instead of more expensive brandies and spirits.

Roughly translated as a ‘reverse coffee’, this specialty is thus named because the milk-to-coffee ratio is reversed and the ingredients are added in reverse order.

The Franziskaner, or Franciscan, is a small mocha served with hot milk, whipped cream and a sprinkling of finely flaked chocolate. The name of this tasty Viennese coffee treat derives from the colour of the habits worn by Franciscan monks.

fabia FOR RESTAURANTS
AND BARS

Aficionados of Vienna’s coffee house culture love one aspect above all others; the fact that time is taken to ensure every guest enjoys a pleasurable and leisurely stay. Sometimes it’s the little things: A kind word or a well-meant “How’s it going?”, the cosy, laid-back atmosphere, or a friendly smile. And none of this would be quite as wonderful without an exquisite coffee experience no other place on earth can match.

fabia – Time is the secret of quality.